Interested in learning more about what you're viewing? Scroll down for a full description!

What am I looking at?

What will I see?

Winter: Mostly boaters who never say die! Yes, some will boat as often as possible, especially anglers who tend to emerge on warmer rainy days, mostly launching from Crooked Creek. Once in a while, the river will freeze over. The ice jams are fascinating to see, but often come with dangerous flooding and debris.
Spring: Once temperatures rise, the water level drops and the ice melts or otherwise moves out, the crew at Rosston Eddy Marina place docks and boats into the river. This is generally quite a sight to behold; a handful of men deploy the entire infrastructure in less than a week's time. A lot of beautiful waterfowl and wildlife abound!
Summer: During prime boating season, you will see plenty of docks, boats, kayakers, anglers, and lots of human activity! Oftentimes, you'll also see a lot of small aircraft arriving and departing McVille Airport (upper left corner), which also provides flight lessons.
Autumn: After an exciting boating season, the docks and boats are removed from the water. The U.S. Army Corps of Engineers removes their channel markers (buoys) in the water, and some anglers show up to fish again late in the season. Western Pennsylvania's beautiful foliage takes over to round out the season.

I've been to the marina, and I see bright objects (after dark) that I don't see when I'm there in person. What are they?

There are other security cameras on-premise which emit infrared light. While not visible to the human eye, infrared light does cast illumination on other objects that this camera does detect. In most cases, you will see objects which appear as bright white lights, particularly when the camera is operating in black-and-white mode, which only occurs in very low light conditions. So, be sure to smile and wave next time you're visiting the marina...you're on camera!

What is that flashing green light I see (after dark) on the right side of the video feed?

This is a navigational waypoint beacon at mile marker 40.8. It is marked in the Allegheny River Navigational Charts provided by the U.S. Army Corps of Engineers. The beacon is solar powered (with battery backup) and generally operates during prime boating seasons (spring through autumn). It does operate in wintertime, if it receives enough sunlight to charge during the day.

How do I know if the water level is high at the river? How often does it flood?

While flooding is not unheard of, it is not overly common; the Allegheny River widens significantly at Rosston Eddy, and water generally has plenty of room to spread out compared to areas upstream and downstream. However, when water reaches the anchor ring on the retaining wall (just below the fire ring in the grass), the river is approaching flood stage. (A text overlay may be displayed from time to time to show where the flood stage is.) You can also view the NOAA NWS Pittsburgh hydrology report for Lock & Dam 7 at Kittanning (upstream) and for Lock & Dam 6 at Clinton (downstream) to see up-to-date reports.

It's a clear night. Am I really seeing stars?

Yes, you are...and there goes Buddy Ebsen! No, we're just joking...however, this camera does a decent job at showing several celestial bodies, including those that appear dim to the naked eye. It's much darker at nighttime with less ambient light than what this camera would suggest through its imaging.

I keep seeing the same three ducks! What's going on?

We're told their names are Huey, Dewey, and Louie. They have taken up residency in the neighborhood, are a flock of their own and never seen without one another, and are often traveling around the marina. You will mostly see them waddling up and down the launch ramp when no humans are around, or foraging on the river.
We haven't seen much of them since late 2021. 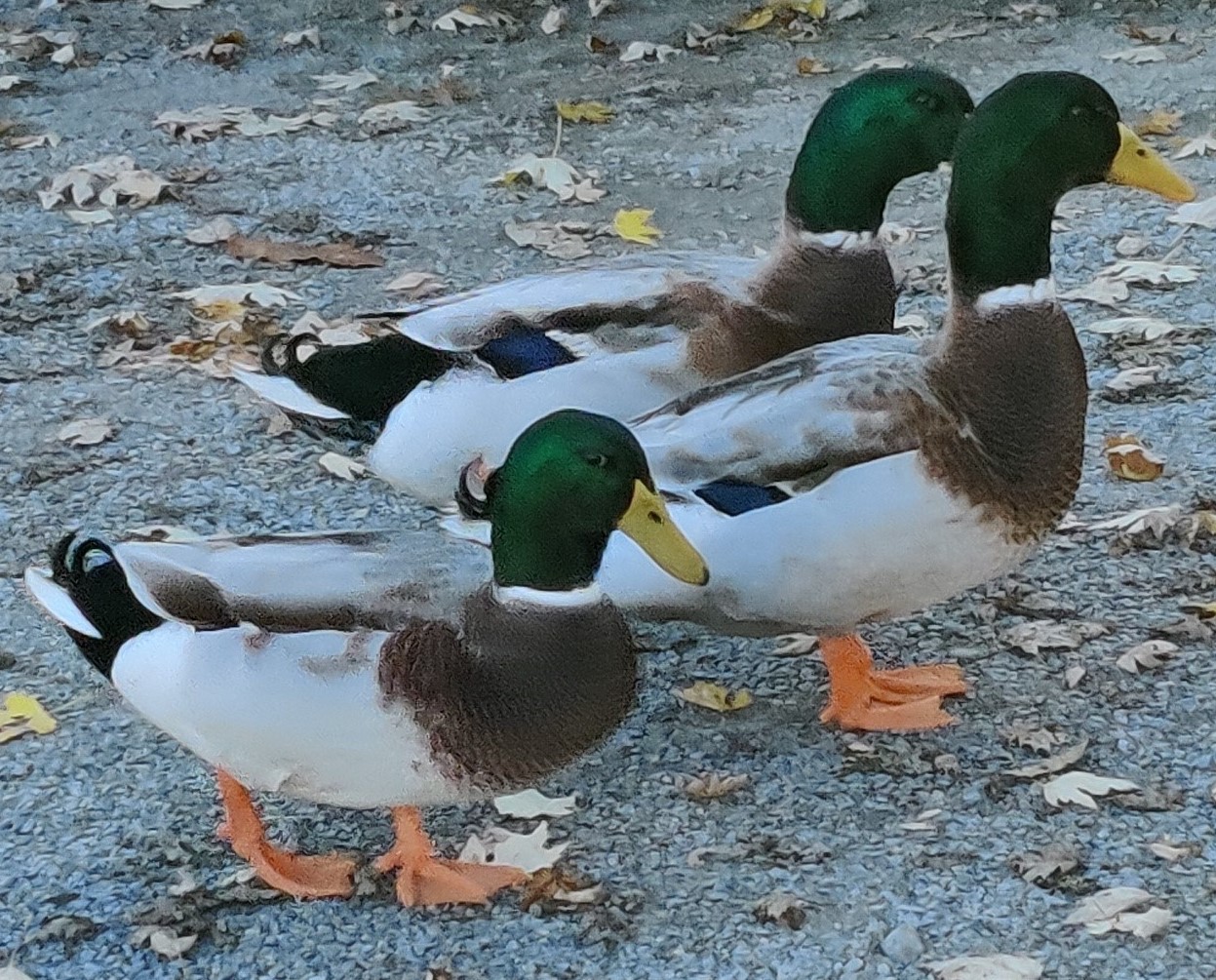 Hey, I see a couple of cats! Who are they?

Ah, a couple of comedians, they are. You may see Sammie (grey tigerstripe) or Stella (black-and-white tuxedo) out and about. They're mostly sitting on deck where they have the best vantage point to hunt birds. However, they enjoy hunting rodents and snakes, playing in the grass, sunbathing, and otherwise fleeing from random strangers who approach them. Sammie is curious and more likely to approach you if she's feeling frisky, while Stella will placidly stare through your soul. 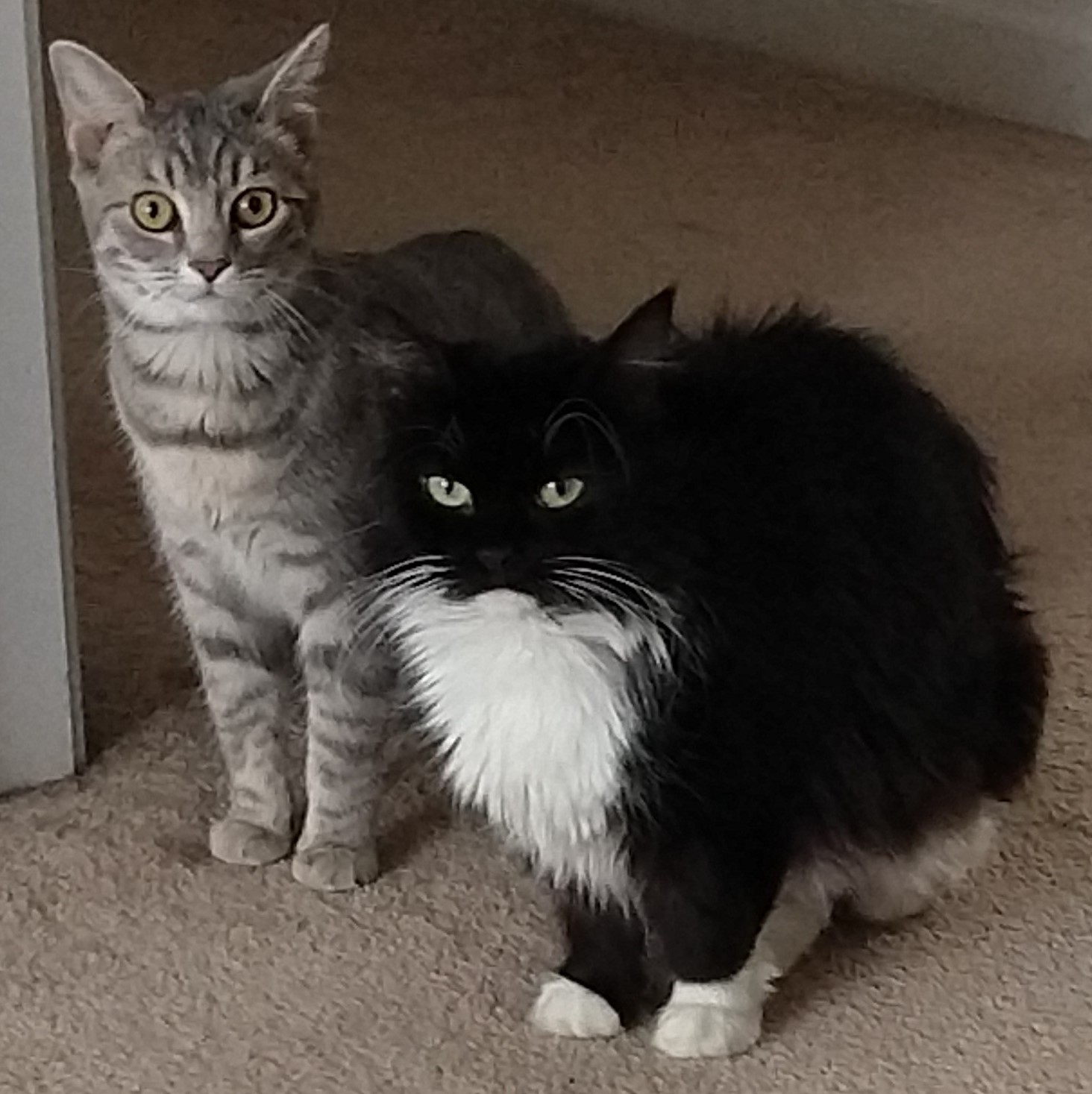 You will see other polite neighborhood kitties who roam about and hunt the marina pretty often. We haven't been able to get close enough to ask them their names, but we hope to meet them soon, nonetheless.

Why are there text overlays in the video?

You may see labels in the video that highlight local landmarks and features. Most of these include nautical mile markers, as noted in parenthesis. These may change from time to time to highlight any significant item or activity within the camera's view, or may be turned off to provide a more unobstructed view.

Why is there no audio feed with this video feed?

While the camera does have audio capabilities, it is affixed to the deck of an eccentric, raving occupant whose conversations and ramblings you probably wouldn't want to hear.

Does the camera pan, tilt or zoom? Does it change position?

No, it does not have any of those capabilities; unlike most politicians, it remains in a fixed position.

What kind of camera and streaming service is being used?

We're not entirely sure about the camera, to be honest. It was a cheap 1080P 5MP IP68 camera we found for about $60 USD, capable of color at night (SONY STARVIS) and little else. We use RTSP to stream our video to IPCamLive, and they do a great job at streaming out to the rest of the world.

The camera sometimes generates electrical noise that interferes with an amateur radio station that is onsite. It may be turned off temporarily while the station is in operation, but will be back online when operations have wrapped up. We're working on a permanent solution to remediate that.

How can I see current weather conditions at Rosston Eddy Marina?

You're in luck! Only ten feet from the camera sits an Ambient Weather WS-2902 weather station, which reports conditions in real-time to Weather Underground station KPAFORDC3.

I've never heard of Rosston Roost...what is it, a bar or restaurant, or some kind of neighborhood hotspot?

Why heavens, no! It's just an affectionate name for a private residence, which is also home to an occupant who finds himself immersed in several madcap projects...like this one! However, said occupant has been known to entertain, serve drinks, and be caught partaking of sparking libations...on occasion.

Speaking of hotspots, I've heard there's free WiFi at the Rosston Roost, may I use it when I visit?

Sorry, this amenity is no longer being offered.